Local entrepreneurs, venture capitalists and government officials are determined for Hong Kong to be a key start-up hub, but many hurdles remain in the path to becoming ‘Asia’s Silicon Valley’…

Hong Kong’s banking district, Central. The city is attempting to diversify from its key pillars of finance and construction with support for start-ups and innovation. Photo: Bloomberg
Technologically savvy, rich, minimally taxed, and with strong links to the world’s second largest economy without the restrictions and risks of doing business in China proper, Hong Kong seems ideally suited to being a major regional start-up and innovation hub.
And yet many insiders are wary about the future, pointing to competition from other regional hubs, lacklustre or misallocated government support, a conservative investment community and a deficit in talent that forces some businesses to outsource event the most basic tasks.
In his 2015 budget speech, financial secretary John Tsang Chun-wah was bullish about the city’s start-up environment and promised the government would do more to support it, including expanding the Hong Kong Mortgage Corporation’s micro-financing scheme and injecting HK$5 billion into the Innovation and Technology Fund.
“I hope to improve the ecosystem for local start-ups and technological enterprises to tie in with the general direction of moving our economy up the value chain and enabling local industries to diversify,” Tsang said. 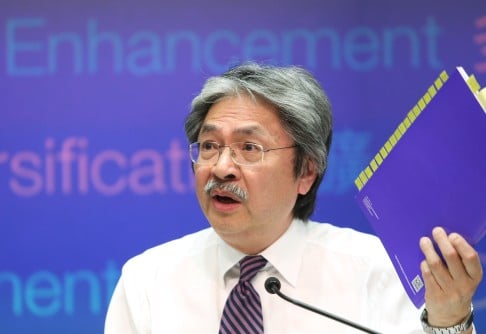 Hong Kong financial secretary John Tsang Chun-wah addressing a press conference following his budget speech on February 25, 2015. Photo: Sam Tsang
Chief executive Leung Chun-ying has also pushed for the creation of a new government department to replace the disbanded Information and Technology and Broadcast Bureau, promising HK$35 million in initial funding. Though this plan has been largely placed on the back burner following opposition in the Legislative Council.
The value of promoting innovation is clear. A study by the Chinese University of Hong Kong and Google, released on Wednesday, estimated that the development of two per cent more newly registered Hong Kong businesses per year would create more than 338,800 new jobs and increase the city’s GDP by an additional 0.24 per cent in the next four years.
Tsang’s pronouncements however were met with a collective shrug from the local start-up community. Many local innovators feel they have achieved success in spite of government, not because of it, a view some experts agree with.
“Government-led innovation is an oxymoron,” said David Webb, deputy chairman of Hong Kong’s Takeovers and Mergers Panel.
Webb was a strident critic of Cyberport, the government funded incubator established in 1999, particularly the decision to award the development contract without open tender to Richard Li Tzar-kai, son of Asia’s richest man, Li Ka-shing. 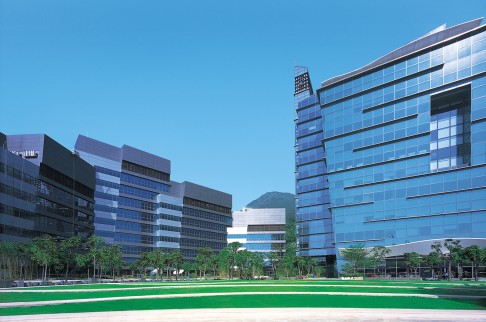 Government ICT incubator Cyberport was opened in 1999 to help foster a ‘creative digital community’. Photo: Wikipedia
“There’s a tendency for political leaders to attach their names to projects that bring hope … to get some buzz out of supporting technology with the idea that it would somehow promote the economy,” Webb said.
“They generally make things worse.”
“It’s a gigantic mistake to assume the government will do anything for you,” tech journalism veteran and co-founder of Re/Code Walt Mossberg told an audience in Hong Kong last month.
Mossberg was speaking at an event organised by StartUpsHK, which holds regular conferences and networking events for founders, investors and prospective entrepreneurs. 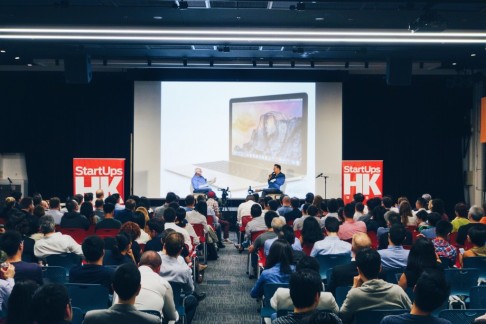 StartupsHK co-founder Casey Lau (right) interviews Re/Code’s Walt Mossberg at an event in Hong Kong on March 20, 2015. Photo: SCMP Pictures
“We took it upon ourselves five years ago to create a community for Hong Kong,” said Casey Lau, who co-founded StartupsHK with Gene Soo in 2009.
“At that time in Hong Kong, everything was very silo-ed, everyone was doing their own thing,” Soo said.
“There were successful start-ups, like JobsDB and [restaurant review aggregator] OpenRice, but … it didn’t spread in the community, people didn’t know what was going on.”
Soo and Lau started one of the city’s first co-working spaces, an idea that has grown in popularity dramatically since.
“We take a little bit of credit for starting that, it’s the main thing StartUpsHK has done.”
Those spaces have expanded from simple shared offices into sprawling, well-funded and resourced incubators and accelerators such as Nest and Blueprint. 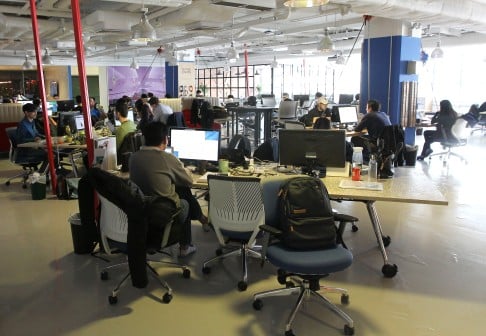 Opened in 2014 by property group Swire, business-to-business incubator Blueprint has attracted a number of local and foreign entrepreneurs to open start-ups in the city. Photo: Edward Wong
Launched by Swire Properties in 2014, B2B incubator Blueprint provides free office space, mentorship and connections to capital for local and international start-ups.
“Swire is a great example of how the private sector can get involved,” said Soo, though he was frustrated that the company was something of an exception rather than a rule.
“There are many traditional families and businesses [in Hong Kong] that don’t really understand this space and it would be great to have them take a greater role.”
The conservatism of Hong Kong investors is a common refrain among other entrepreneurs and start-up founders.
“Our investors are predominantly from Greater China,” said Norman Cheung, co-founder and chief executive of storage start-up Boxful.
“The VC players are much more active in China, the market there is so much larger. The money those start-ups are raising is incredible.” 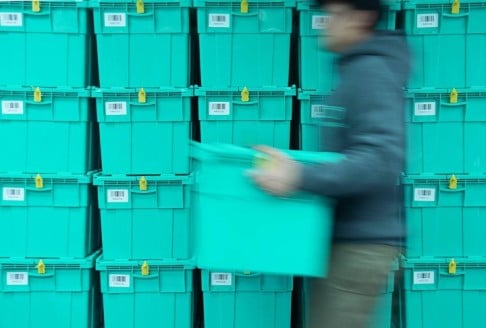 Norman Cheung, chief executive and co-founder of storage start-up Boxful, said most of the company’s investors come from outside of Hong Kong. Photo: SCMP Pictures
“It’s easy to raise seed capital in Hong Kong. It’s much harder to find the million, two million dollar investment. We’re not a city that’s ready for this kind of growth,” said Lau.
Cheung agrees: “I think there are a lot of angel investors, but once you get into the A and B [funding rounds] it starts to get tough.”
According to the Google and CUHK study, 88 per cent of local entrepreneurs stated their major source of seed capital as self-funding, with only 8 per cent securing venture investment.
This conservative culture affects start-ups in another way as well: talent.
One start-up founder told the Post that she’d witnessed a gaggle of employers pitching their companies to graduates of a beginner-level front-end development course, so desperate were they for even moderately skilled workers.
“Hong Kong has a big shortage of technology talent, we’ve had a lot of trouble building up a good team,” said Cheung. 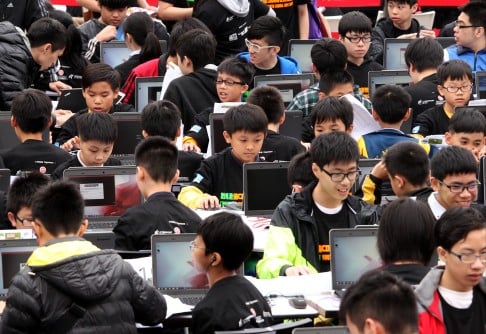 Young people take part in the Cyberport Youth Coding Jam 1000, an attempt to set a world record for most under 18 year olds coding at once on April 9, 2015. Photo: May Tse
Richard Rayles, operations director of Philippines-based outsourcing company SuperHero, said he gets enquiries from Hong Kong companies on a weekly basis, though he was quick to point out the city is “not the only market with a digital talent shortage”.
Some start-up founders said the shortage is due to competition with finance for developers.
TT Chu, co-founder of image recognition start-up Brand Pit and a graduate of CUHK’s engineering school, said that “every year in that faculty there are 600-700 people graduating, all of these people have been trained on how to do programming.”
The problem, Chu said, is that “people love to go into investment banking”.
Big salaries aren’t the only thing causing young Hongkongers to avoid start-ups, many are afraid to take the risk that joining a new venture inevitably entails, and those who may want to are often dissuaded by their parents or friends. Some 43 per cent of budding entrepreneurs considered social and cultural norms when deciding whether to set up a business, according to the Google-CUHK study. 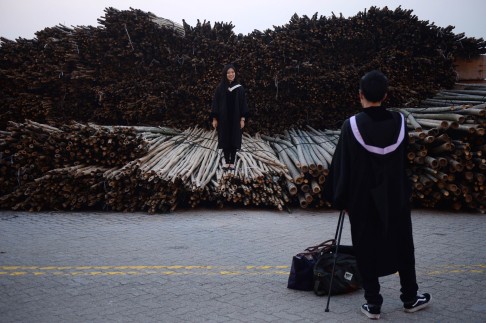 Two Hong Kong students take graduation pictures atop piles of bamboo scaffolding. Experts say the city needs to do more to encourage entrepreneurship among young people. Photo: AFP
Tytus Michalski of venture firm Fresco Capital wrote recently that Hong Kong needs to “pass the mom test”.
“We need to convince all of the moms in Hong Kong, including the tiger moms, that entrepreneurship is a serious option for their children,” he said.
Education can play a role in this, Yat Siu, chief executive of digital media company Outblaze, told an audience at the Post’s inaugural Game Changers forum last month.
Siu said the city should learn from the Finnish education system, which places less emphasis on formal exams.
“If you think about my children going to school and the way they’re being educated … it’s still turning out bureaucrats,” he said. 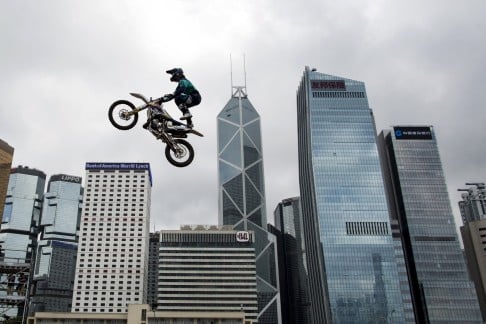 Despite the many hurdles, insiders are positive that Hong Kong could ultimately cultivate a successful start-up economy. Photo: Reuters
Despite these hurdles, the Hong Kong start-up ecosystem has grown by almost 300 per cent since 2009, with several local firms landing high-profile investments.
Experts said that while progress may be slow, the ecosystem will continue to improve as small successes inspire greater ones.
“Hong Kong needs a unicorn,” said Lau of StartupsHK, using the Silicon Valley term for companies valued at over US$1 billion.
“I’d also be happy to see 20 hundred-million dollar companies.”
source from SCMP
新創企業提供了很多新主意，當中有不少困難他們都要嘗試解決。通過他們，我們就能看到未來。香港天使投資人 Simon Squibb 早前在 LinkedIn 發表文章，分享他們在投資裡遇到的問題，他相信新一年在科技新創企業世界會有不少改變。