直接觀看文章
Michael Freeman had long noticed entrepreneurs seemed to have mental health issues.
The clinical professor of psychology at the University of California-San Francisco’s medical school spent a decade at a company where his clients were the founders of businesses. He estimates that about a third of them seemed to have some type of mental health condition.
He still notices the trend today in his work coaching executives. 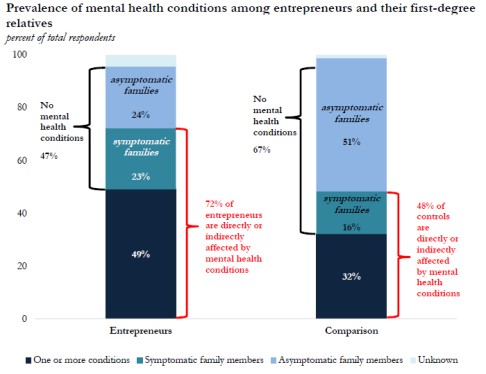 Freeman and California-Berkeley psychology professor Sheri Johnson decided to take a deeper look at the issue. They begun polling entrepreneurs and found a strong link between mental health conditions and entrepreneurship.
“The people that we admire for being entrepreneurs seem to come from the same gene pool as the people who are kind of socially stigmatised because of mental health conditions," Freeman said. “They must confer some adaptive advantage otherwise they wouldn’t be so highly represented in the population."
Forty-nine per cent of entrepreneurs surveyed reported at least one mental health condition. Nearly a third reported having two or more mental health issues, such as ADHD, bipolar disorder, depression, anxiety or substance use conditions. And half of the entrepreneurs who reported no mental-health conditions identified themselves as coming from families with a history of mental illness.
This may seem counterintuitive. Why would an unstable person be most attracted and suited to launch a business?
Freeman points out that there’s a beneficial side to these mental health conditions. Those weaknesses come with corresponding strengths that the average healthy person doesn’t have.
For all of its ills, depression also brings empathy and creativity. Martin Luther King and Mahatma Gandhi attempted suicide as teenagers. Uncommon levels of empathy can allow a businessman to better understand a customer’s need. And a creative mind won’t be satisfied on the corporate ladder, but instead in a fast-moving start-up where he or she can unfurl ideas and dreams.
Individuals with ADHD naturally make decisions faster, are comfortable working independently and are more creative; necessary skills at a start-up. They’re also likely to be bored working for someone else.
Shades of bipolar disorder can even benefit an entrepreneur.
“When someone truly has manic-depressive illness and they’re very disabled by it, they’re in and out of the hospital; if you look at their relatives … they are all high-achievers," Freeman pointed out.
“That’s been demonstrated over and over again."
source from The Washington Post