直接觀看文章
Chinese internet mogul Jack Ma has reportedly purchased a home on the Peak for HK$1.5 billion, breaking Asia’s record for the most expensive home by square-foot.
The property at 22 Barker Road was built in 1949 and renovated in the early 2000s by deceased local architect Karl Shiu Ka-leung of the KLS Planners.
Hong Kong Free Press was granted exclusive access to pictures of the house before and after its makeover.

22 Barker Road before and after its renovation. Photo: KLS Planners
Ma, Alibaba’s founder, bought the house from Francis Yuen Tin-fan, former Hong Kong Stock Exchange CEO and his wife Rose Lee Wai-mun, Hang Seng Bank chief executive. Yuen was also a former PCCW deputy chairman.
Ma paid HK$150,000 per saleable square foot for the four-storey home, the second-highest amount for a residential property in the world after a property in Nice, France, according to the Hong Kong Economic Journal.

22 Barker Road before and after its renovation. Photo: KLS Planners
The Yuens renovated the home when they bought it from the Belgian consul general in 2000.
The project, which transformed the historical house into a modern building, was architect and interior designer Shiu’s “proudest masterpiece”, said Shiu’s son Julian.
“My dad was talking about the project a lot and he took me to the house on the Peak a few times when I was little. He designed the interior as well, it was done in modern classic style. ”

22 Barker Road before and after its renovation. Photo: KLS Planners
The project took two to three years, the junior Shiu said, with building materials brought in from overseas and furniture tailor made.
The house has four ensuite rooms, three bathrooms and seven living rooms. With four big balconies across four storeys and a rooftop terrace, residents can enjoy a 220-degree view of the Victoria Harbour, Shiu said. The sea view from 22 Barker Road. Photo: KLS Planners
Next to the house is a 20,000 square feet private garden, which includes a lawn and a small forest.
Shiu said his father applied traditional Chinese feng shui theories in designing the interior. The Yuens loved the furniture and made subtle changes to the interior in the 15 years they lived there, according to KLS Planners. 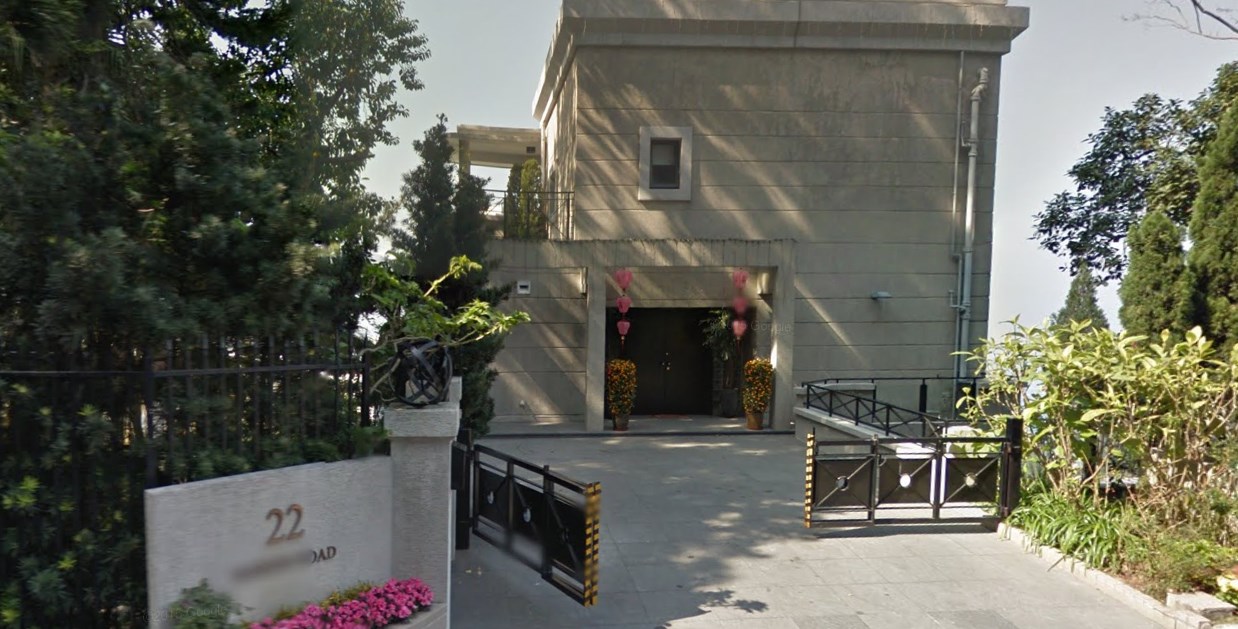 The house in 2011. Photo: Google Maps.
Pictures seen by HKFP showed the house was furnished in a blend of Chinese and western styles, sporting satin sofas, folding screens, black and white checkered floors and artfully rumpled ceiling-to-floor curtains.
The Yuen couple bought the property for HK$163.5 million in 2000, meaning they may have pocketed around HK$1.3 billion from the deal. 22 Barker Road after its renovation. Photo: KLS Planners
The top floor of the building was featured in Discovery Channel’s “Super Home” programme in 2006 when the couple rented it out to a banker. Karl Shiu Ka-leung stands proudly in front of the house after its makeover. Photo: KLS Planners
Karl Shiu founded KLS Planners in 1999. His work was mainly in Hong Kong and mainland China. He died aged 58 in a tragic motorcycle crash in 2010.